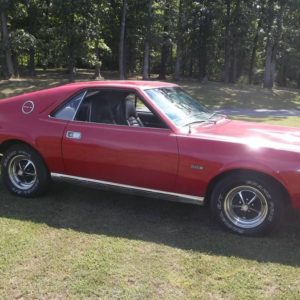 1970 AMC AMX for sale. 360 4 barrel. It originally was a 4 speed car and was converted to an automatic with console.

It is an older restoration as the paint is a 6-8 footer. Showing some age with some cracks and bubbles in the paint. Little to no rust – very nice car in need of a new paint job. Original Paint was Golden lime Metallic based on the door tag. The interior is in very nice condition, new carpet, seats our in top condition. The dash area could use some detailing…

Recently received a carb rebuild, new starter and point replacement. This is a nice driver with opportunity to enjoy weekend updates.

Hemmings Classic Car included the two-seat AMXs in their list of 32 best cars to restore in terms of economic sense after factoring purchase price, parts availability, as well as restored value and desirability.

I love my Mustangs but this has become a tight second… I buy these fast when they show themselves!

There are no reviews yet.